Yum, the Potato Soup was good! 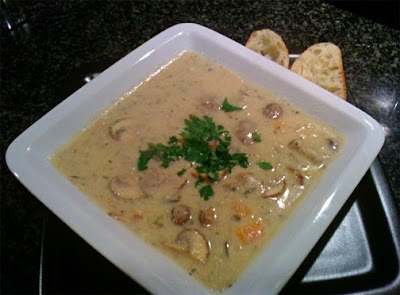 Alright, the photo doesn't really do the soup justice, but trust me.  It was very good and easy to throw together.  This is one of those easy don't-have-to-stop at the store kind of weekday meals.

Started with a recipe for heart garlic potato soup from allrecipes.com and then improvised based on what I had in the house.

To this recipe I did a few different things, such as substituting the sausage with some bacon bits I had from the weekend.  I also sauteed the onions, carrots and garlic in the pan first.  I then cooked the potatoes in chicken broth with a sprig of rosemary.

I then poured the chicken broth into the sauteed veggies.  Next I sauteed some mushrooms and made the roux (butter, flour and milk) I then poured that into the soup mix and added the mashed potatoes.

That's it.  Todd was happy after adding some more salt to the pan and said the recipe was a keeper!

P.S.  The fresh parsley is still growing in the garden, even with the few frosts we've had.

Email ThisBlogThis!Share to TwitterShare to FacebookShare to Pinterest
Labels: food