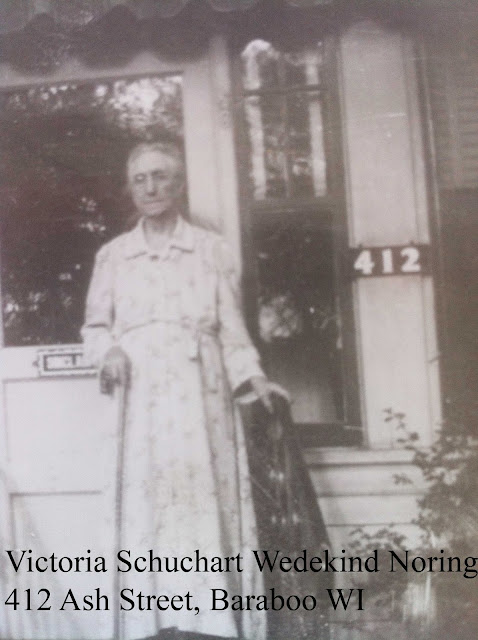 This past weekend was the annual Wedekind family reunion in Baraboo, WI.  I'm the family's genealogist in this branch - lucky them.  I love to go as this event grows more each year and new branches come with great photos and wonderful stories that bring these people to life.

I met a distant cousin who brought photos of Victoria Schuchart, my great-great grandmother, standing on the front porch of her house on Ash Street in Baraboo, WI.  I'd never seen a photo of her before so it was awesome to "meet" this grandmother.

I know from my genealogy research, she was born in Lancaster, WI around 1866, a daughter of the Schucharts and Gabels of Grant County, WI. Her parents and family were German Catholic immigrants who had previously farmed the rich soils around the villages of Geismar and Eichsfeld in the Thuringer province of Germany until the late 1840s.  I also know this was one of the last Catholic vestiges of northern Germany in an otherwise "reformed" part of the country.
To keep their religious freedoms and seeing the new opportunities in America, they emigrated in the 1850s to Wisconsin.  The Wedekind clan came 25 years later with a widow Christine Noring Wedekind and her five children finding a safe landing with this clan in Grant County. 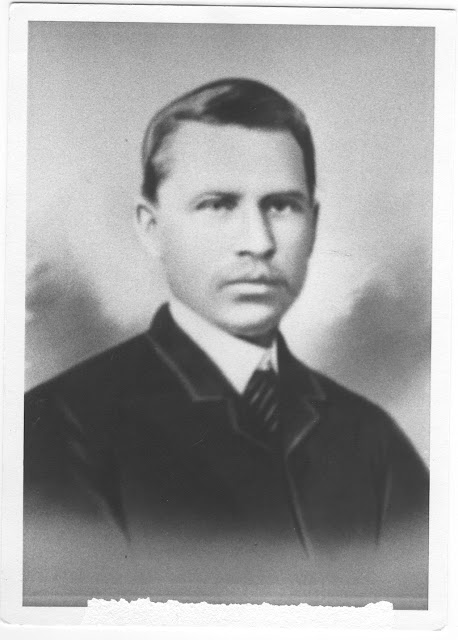 Wisconsinite Victoria, married my handsome German grandfather, Joseph, seen above in the  late 1880s.  Joseph died in the early 1900s after he and Victoria had started a good life together and had had several children.

Victoria, according to many grandchildren, and stories told to me this weekend, married a second great, loving man named Henry Noring,  Henry and Victoria  lived for many many years in Baraboo, WI.  They  raised all of her children with Joseph, who died unexpectedly of a heart attack in August 1903. 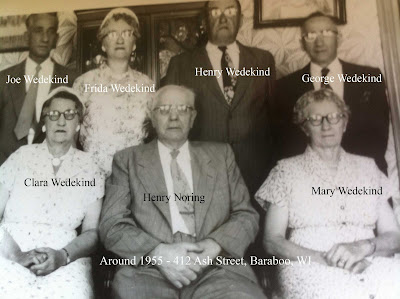 Above is a photo of the adult children of Victoria Schuchart and Joseph Wedekind with their deeply loved step-father, Henry Noring.  This photo is from 1955.  My great grandfather, Henry Wedekind is in the back row.

My belief is that Victoria was introduced to her second husband, Henry Noring, by her first mother-in-law Christine, who was a Noring and had emigrated and found welcomed refuge in Lancaster, WI.   I'm still figuring this out but this is why I love history and genealogy.  There are so many threads, stories, and deep connections of family and love.

Seek out your roots.

Email ThisBlogThis!Share to TwitterShare to FacebookShare to Pinterest
Labels: family