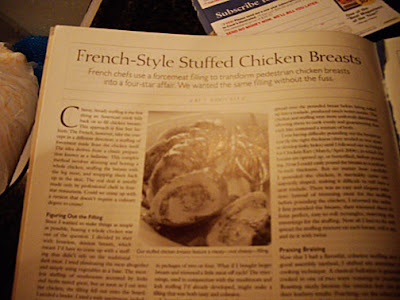 For Valentine's Day, Todd wanted to make a recipe he read in Cook's Illustrated. This magazine is a thinking person's guide to food nirvana, in that it doesn't just give the recipe but describes in great detail how the writer created, modified and or improved the original recipe. While it can be intimidating, at times. the detailed technique of a recipe gives you a great understanding of food preparation.

For tonight's meal, there were several steps. Cut up the chicken, prepare the stuffing, wrap the rolled chicken in its skin, make chicken stock, and for good luck, feed raw chicken wings to the dogs. 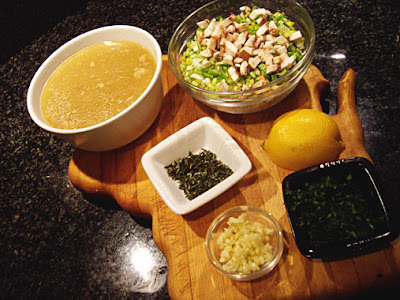 First we chopped all the ingredients needed for the stuffing which included; chopped mushrooms and leeks, fresh garlic, parsley and thyme and some lemon juice. This was sauteed for a few minutes, removed and then the pan was deglazed with champagne (our suggestion - hey it was Valentines day!) to be used later in the sauce. 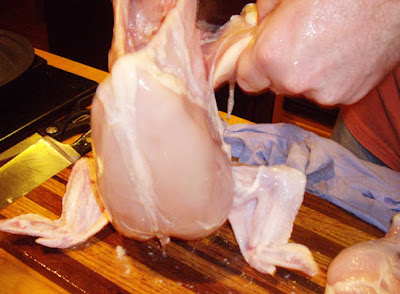 After cutting the chicken meat from the bones, Todd set aside the breast and thigh meat. The thigh meat was chopped and added to the stuffing mix. The rest of the chicken went into a pot to make chicken stock. (Except the wings-a spur of the moment treat for the pups. I tried to get a photo, but they ate them too fast.) By using a whole chicken Todd has the freedom to make his own cuts and the price is much more reasonable. A good cleaver is a great kitchen tool. 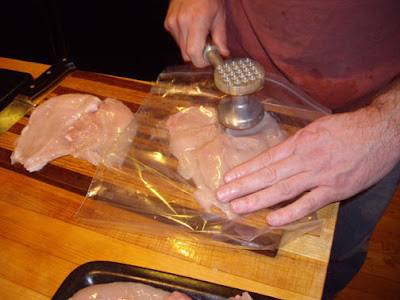 After butterflying the breasts and flattening them, Todd placed the mushroom, leek and chopped thigh meat mixture on top of the breasts. He then rolled them tightly. 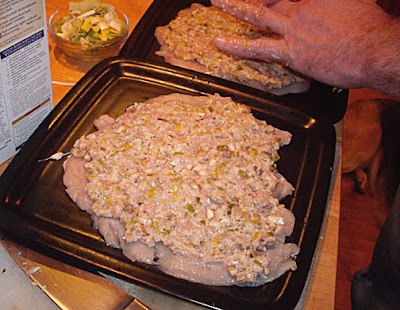 Next he took the extra step to wrapped the breasts back into the skin that was pulled whole from the original chicken. 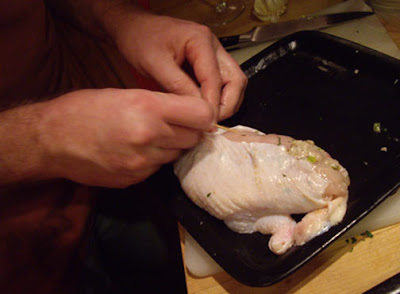 This step really keeps the chicken moist during the heating process. After tying them off, the chicken was pan-fried for 2 minutes per side and finished in the oven. 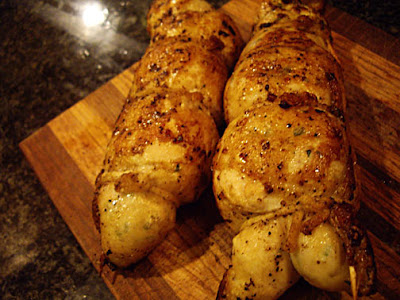 While the chicken was finishing off in the oven, Todd made a really nice sauce from the deglazed pan of the fried mushrooms and leek mixture. To it, he added course-ground mustard, wine and chicken stock. Reducing the liquids created a very nice and flavorful sauce. 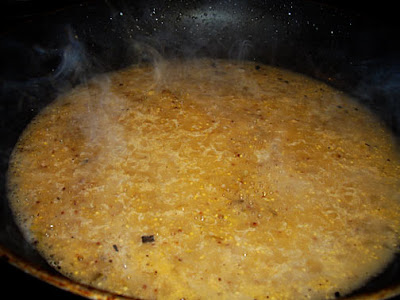 Served with couscous and freshly steamed broccoli, the french-styled stuff chicken breasts were divine. While a more labor-intensive dinner than most, it was a joy spending Valentine's cooking with Todd. 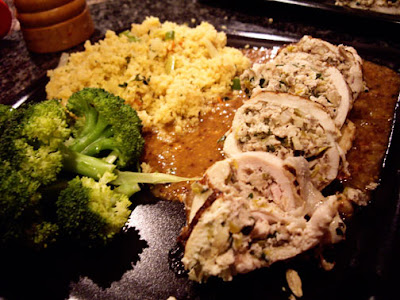 Like we always say, "The family that cooks together, stays together"

Email ThisBlogThis!Share to TwitterShare to FacebookShare to Pinterest
Labels: food